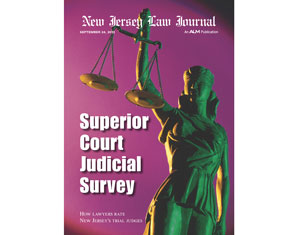 Per The New Jersey Law Journal:

"We present in these pages the results of the Law Journal's sixth cyclical survey of New Jersey lawyers about the quality of judging on the state's trial bench. It is designed to assess the comparative strengths and weaknesses of judges, their demeanor and their potential biases, all of which are highly relevant to customers of the courts.

"As in the past, the survey is a private enterprise, conducted without the cooperation or endorsement of the judiciary.

"The survey is meant to provide a forum that pools the practicing bar's collective knowledge about judges' performance. Lawyers share that lore informally all the time, but not in any quantifiable way that can be readily referenced and distributed. This survey supplies that medium.

"Most of the survey is good news. Statewide, lawyers gave 350 judges an average overall score of 8.04 on a 1-to-10 scale, which is a solid "B." The deviations from that average were for the most part gradual.

"Ratings necessarily produce comparisons, which unavoidably produce bests and worsts in the rankings of judges. But that is not the point of the survey. Rather, we intend it as useful feedback for judges from the lawyers who appear before them, and as useful information for a lawyerfacing a judge for the first time.

"We hope the survey will be read and used in that spirit."